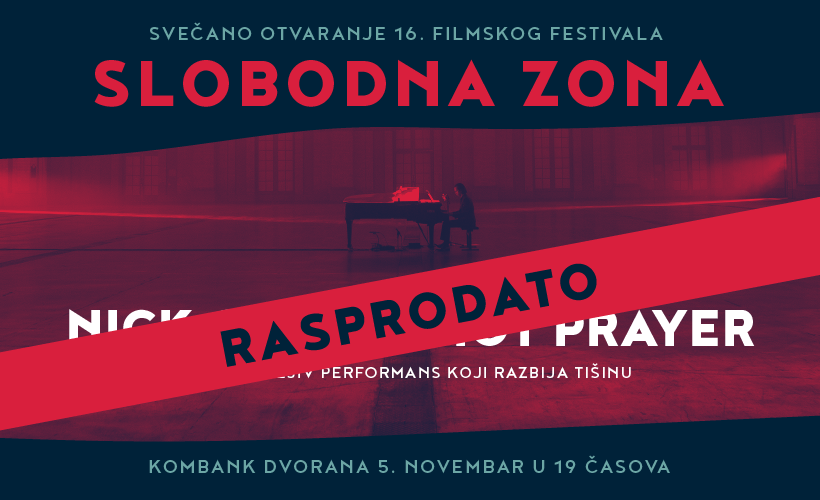 Just as it was expected, tickets for Cave are sold out in the Free zone!

The second rerun will take place on November 5th at Kombank dvorana!

Huge worldwide interest in the global cinema premiere of the musical film performance Nick Cave – Idiot prayer is an event that goes beyond the phrase “selling like hotcakes”. After all, it’s the same with everything else associated with this fascinating musician. The film was shot on June 19th, just after the end of isolation in Great Britain, with the assistance of the minimal crew. The premiere took place online on June 23rd on Cave’s YouTube channel – it was broadcast live, meaning without the possibility of watching it later.

Tickets for the second projection in Belgrade can be bought at the cash register of Kombank dvorana and online at Tickets.rs. 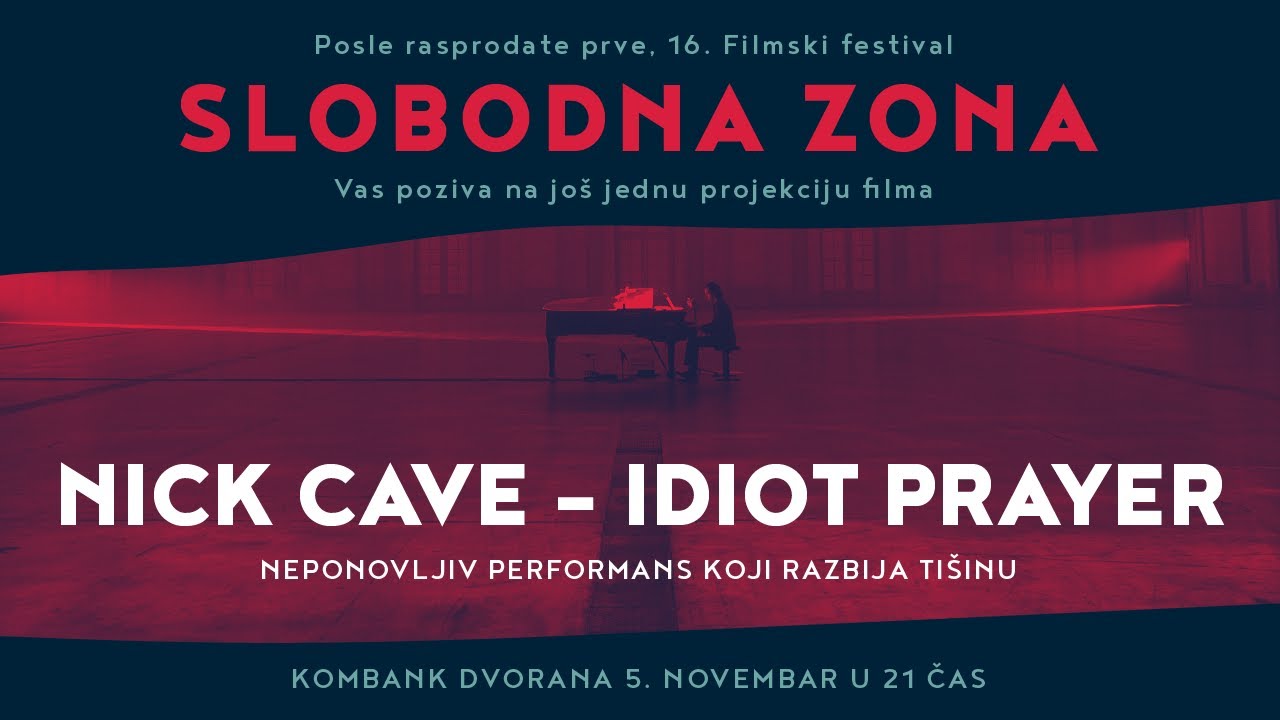 Another important piece of news is that the Film festival Free Zone is supported for the third time by program Creative Europe and its subprogram MEDIA. The European Commission has recognized Free Zone once again as one of the most important festivals in our country and region. Subprogram MEDIA encourages the evolution, distribution, and promotion of European featured and animated films, documentaries, TV shows, and new media content. This subprogram supports film festivals and audience development, a well as the professional development of film experts, and platforms for the distribution of audiovisual content.

The sixteenth edition of the Free zone festival will take place from November 5th to November 10th in ten movie theaters in Belgrade, Novi Sad, and Niš. The big news is that you can watch the film program all over Serbia on the online platform KinoKauch.

And this isn’t the only novelty; this year, the Festival has a new program line – Green Zone, aiming to raise environmental awareness of the audience. Films on this topic make the audience think, but also engage in activism – because there is no better time than now to care about nature.

Eco-thriller Wood, a magical documentary about the life of the big forests; Hidden life of trees, and the optimistic documentary and But Beautiful are the first movies the audience will get a chance to see in the Green zone selection. With the almost magical objective, recorded on the same note, the film But Beautiful by Erwin Wagenhofer is searching for beauty and kindness, showing people who are creating something innovative and meaningful. From uneducated women building solar panels in the villages across the world; the spiritual leader with mischievous and essential messages; to the young jazz musicians – this movie connects them in the unique message that a better world is possible.

EU Zone of change, the debutant line of last year’s festival edition, brings us 6 movies – Gagarine, The Realm, This is our Land, Little Girl, Midnight Traveler, and The Mole Agent. What brings them together is dealing with the concept of change and what change can give to the individual.

In the Chilean spy documentary The Mole Agent, Sergio is an 80-year-old spy hired to find out if there is abuse in the retirement house, as suspected by the daughter of one of the house members. Charismatic Sergio goes on a mission and discovers the truth – but not the one he was hired for.

Selection 14+ is a well-known line that includes films for the youth. Sune – best man, Rocca Changes the World, and Wildland are the films chosen for this year’s edition of the festival.

In Wildland, following the death of her mother, Ida moves in with her aunt and cousins. After the initial harmony, she realizes that a family clan is involved in criminal activity.

Selection Women’s line will once again focus on the question of limits, limits of women’s bodies, limits of being a woman, and of course, women empowerment. Films that will be projected this year are Toni Morison: The Piece I am, Glory to the Queen, Euphoria of Being, Body of Truth, and Undine.

The Festival will be solemnly closed with the documentary Body of Truth by the German author Evelyn Schels. Artists Marina Abramovic, Sigalit Landau, Shirin Neshat, and Katharina Sieverding have been politicized with their personal experience with war, violence, and oppression. Those experiences are integrated into their art, where they use their bodies as the most personal way of expression.

This year’s edition is supported by the MEDIA program, Ministry of Culture and Information of the Republic of Serbia, Reconstruction Women’s Fund, French Institute, and Movies that matter.
Come in person, come online!
See you in the Free zone!