The Free Zone Film Festival is organizing a new youth program called Sonar. The program is designed in the form of screenings and discussions with guests who will reflect on whether the appearance of social networks has affected the notion of documentaries today. How much do vlogs, Instagram stories, Tik Toks and similar video formats affect our perception of a documentary? In the abundance of Internet contents, the question is how much of our attention should be dedicated to something, and how to distinguish quality content from the frivolous one, when it’s impossible to penetrate the ground? That’s where Sonar comes in.

Relying on all the achievements of documentary so far, Sonar’s goal is to give the necessary critical review on the modern content that is placed, sometimes without our conscious decision to consume it, in order to understand and categorize it better.

Criticism and filtration of social networks are becoming increasingly necessary. How is it possible to extract something which has the potential to move the boundaries of the 21st century documentary in these times, in which technology and democratic availability of platforms allow us all to become documentarists? What is defining for our generation, what is left for us from the conventional approach to documentary, and what is the novelty of the time in which we live? What are the positive and negative effects, the things that we have adapted to and the ones we haven´t, the changes we have noticed and those we have missed, and how important generational differences actually are in this rapidly changing world? These are the topics two “opposing sides” will be discussing: the director of the festival Professor Rajko Petrović and the editor of the Sonar program, Tamara Milošević.

As the first selection of video works from the domain of web documentary, works from five categories will be presented: docuweb, poetry, storytelling, travel and vlog.

After the screenings and panel discussion, the first guests of Sonar will be the Belgrade documentary duo Marka Žvaka. They will talk to the audience about their work and the similarities and differences between creating content for television and the one for the Internet. 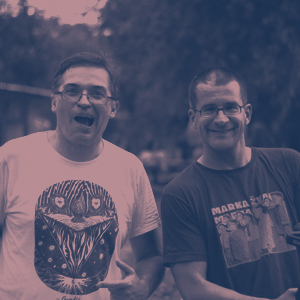 Dušan Šaponja and Dušan Cavić are journalists, TV and radio show authors and hosts since 1994. The episodes of Ciklotron and Marka Žvaka TV series, both had their run on TV B92, were many times awarded and recognized, both nationally and internationally. In 2008. their film PRC was awarded the best short film on Kratkofil documentary film festival in Banja Luka.
In 2009, Šaponja and Čavić attended Discovery masterschool as the only participants outside of the EU. The trailer for their film Biba Struja won them the best project awards on ZagrebDox and IDFA film festivals in 2010, and their first feature-length documentary “Biba Struja” was released in 2012. Marka Žvaka series, whose segments have been incorporated into Greetings from Serbia video artwork, has it’s regular weekly run on YouTube platform. In December 2020. they were awarded a “Dobar primer novog optimizma” award. In the meantime, Šaponja makes wine and Čavić does sewing and tailoring.